Fire worship creates a wireless connection to the worlds beyond...

Out of mud you grow, reaching to the sun...

Householder yoga ranks among the highest forms of excercise...

Make no mistake, there is no duck, no tree, no grass, no player, no mistake...

The path of tranformation 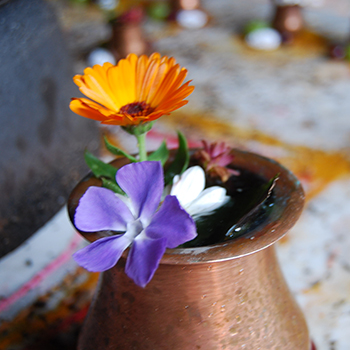 In one sense, the tantric path opposes the Vedic paths of jnana, bhakti, and karma yoga, because the focus in tantra is on the energetic rather than on the purely conscious aspect of the divine. Tantra worships the goddess Shakti, the lunar, female aspect of the ultimate divine, rather than the god Shiva, the solar, male aspect. In reality, all Vedic paths as well as Hinduism as a whole incorporate tantric principles, especially in dharana, through concentration techniques such as puja (ritual), mantra chanting, and visualization of yantras, chakras, and deities. As usual, the apparent opposition between Veda and tantra is another illusion.

Tantra is a holistic approach to the study of the universal from the point of view of the individual—the finding of the real you by reprogramming rather than destroying the illusionary you. The Vedic tradition tends to see the illusion of life as illusion only, undesirable, and the cause of all suffering. Hence the Vedic tradition is more ascetic in nature, going for detachment rather than for enjoyment (bhoga). The tantric tradition chooses to enjoy the divine play, or leela. The tantric sees embodiment as a manifestation of the divine and ecstasy as a path to enlightenment. The objective of the tantric is to let the wisdom, goodness, and peace of the self express itself into the energy, body, and personality, as the divine energy goddess is always ready to receive her beloved, the divine consciousness, self, God. To the Vedics, the you that is witnessing whatever happens is the you that is to be realized, purusha or cosmic consciousness. To the tantrics also that remains the goal, though it is reached by embracing the prakriti or energy and the forms that are created out of prakriti through purusha.

Tantra yoga usually employs sadhana, or exercise, as a means to obtain siddhi, or power. This is supposed to be the most efficient method to reach enlightenment in this Kali Yuga age. Through more and more sadhana, the practitioner obtains powers that provide control over the essential energies of life. Thus tantra includes many of the magical aspects of yoga and of the ritual sacrifices made in order to change the energy patterns of karma.

A main focus of attention are the chakras, the seven energy centers of transformation located along the spine. In kundalini yoga, which can be seen as a major branch of tantra yoga, the most essential energy, called kundalini, is forced upwards, piercing the chakras. Presence and spontaneity are other important elements of tantric psycho-technology. The transformation of sexual energy into pure spiritual energy or kundalini, of which the sexual energy is an expression, is the focus of another well-known tantric branch.

Not all tantrics are yogis. Some just practice tantra for the powers it may bring, intending to use these powers for worldly benefits rather than for attaining enlightenment. That may also be the case for other yogic practices, for example, some people practice yoga mainly because they hope it will lengthen their life.

The advaita path of non-dual knowledge...

Ask your questions to Peter every week live...

Connecting to the spiritual world inside and outside...

Leela is the ancient vedic name for the theater of life. Life in all its forms is an illusion behind which we can find the ultimate truth of pure Being. Yet life is also a divine theater, a spiritual game played by us, the actors. Yoga allows us to hold on to the bliss of truth while playing the game. And also this yoga is a game, which we can only take seriously if we do not take ourselves and this game too seriously. That is the meaning of Leela Yoga, nothing more, nothing less. So, Leela Yoga is a vision on yoga and also a name for a simple organisation that allows me to bring this vision into practice... more about Leela Yoga & Peter Marchand

The Yoga of Truth

The Yoga of Nine Emotions

As the destination is the same for all, it is easy to make the error of assuming that the path must be just as universal.

The attachment that happens in the pursuit of happiness is the main source of unhappiness.

Don't think of going somewhere, because this somewhere will come along with you wherever you go, as you are already there.

Yoga requires unity between enjoyment and suffering, between bhoga and yoga, even between attachment and detachment.

How can anyone be "good" without a choice between good and bad?

When our day has been entirely ego-centered, then our meditation will probably have similar poor quality.

When the focus on the self is held strongly enough, the flow of kundalini energy happens on its own, naturally.

Tiptoe inside, don't make a sound, don't scare away that which cannot be found.

Enlightenment is nothing more or less than the final level of the game of life.